What impressed me about the visual novel Her Lullaby is the amount of compassion offered to different machinations and manifestations of intensely violent acts. Its horror functions in a rare way: it’s clearly and reasonably stated. No esoteria, no unknowability, no othering. This is less immediately scary than I’m used to. It’s less shocking, the way a slasher story is often framed as a natural disaster. Instead there’s a bridging of states, not a flat confrontation with fragility, but a burn up into fragility always being there.

Getting to that point requires mistakes to be made. Her Lullaby leverages a particularly cold open. Sal, the protagonist, wakes up in an abandoned warehouse with a splitting headache and a knife in her hand. In the room is another girl, awake for a bit longer, scared to death but won’t show it. Despite the lingering feeling of death, she moves in for light banter. The lines are corny. She’s annoying, too light spoken for a stranger, too unserious for the situation, and gets under the skin of the narrator. Depending on the inclination of the player-actor, she’s killed for being annoying. 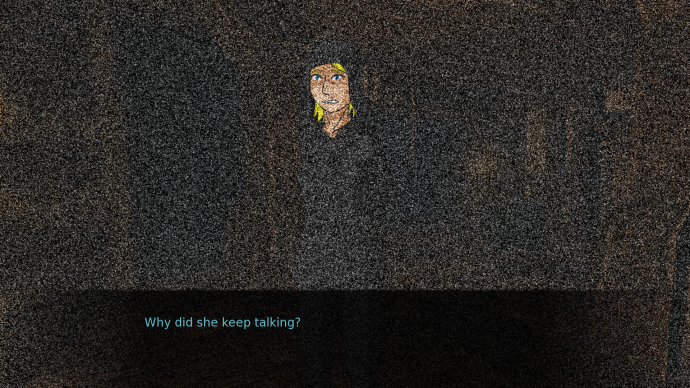 Just for being annoying! I think, and this comes from what bothers me about my person, but lashing out because you’re under stress, when you don’t really mean it, is an intensely shameful act. That shame is escalated to the irrational and impossible as the protagonist commits a killing they don’t mean. Under most circumstances, from my player point of view, it felt like a confusing loss of control

It is sudden, a bit unfair, and definitely clever. There’s a choice to size up your surroundings or focus on the knife on hand. Picking the latter, on whatever whim or unconscious impulse, removes choice when Sal loses her temper. Though I think ascribing real value to small arbitrary decisions like that is bullshit, there’s a consistency to these railroaded scenarios. Lying to Tocco, or focusing on the worst of you or her, leads to a grisly death. Put in terms of the game’s tagline; “A horror visual novel about trust and violence.”

As mentioned this factor of trust becomes much more direct when choices to outright lie present themselves. They feel natural, that is, choosing to lie is self-preservation. Sal makes her own case, through scattered thoughts, of what could be behind the other’s facade. It feels obvious. Tocco is her kidnapper. In this place and circumstance, she would be acting out of self-defense. It’s a paranoid, frenzied, panicked “it’s me or her” mindset. It’s yet the easiest to understand and sympathize with.

A thing horror traditionally does, through costumes, framing, or whatever, is create a sort of fictional distance from its violence, creating scenarios that are difficult to empathize with. This lets the voyeurism be symbolic, fantastical, or whatever, but most importantly unrelated to actual participation. Her Lullaby is instead reasoned out and empathetic. Naturalistic horror is uncomfortable because it’s adjacent to real feelings and situations—and that kind of uncomfortable fiction is the working definition of transgressive fiction.

Common to the subgenre, Her Lullaby focuses on the internal living of a serial killer. The player’s desperation is a foil to her calculating confidence. I have a morbid fascination with these kinds of stories and I know how they basically play out. American Psycho is probably the most ingrained in pop culture. What I’ve read of Stephen King, Hubert Selby Jr., etc, is of similar note. They’re variations of men reckoning with their privilege and the expressive box it puts them in. Patriarchal pressures and a lack of exposure to caring values cause them to snap and default to violent excesses of entitlement.

Underpinning transgressive fiction is a deep frustration and sadness. This classic dynamic is emphatically not what occurs in Her Lullaby. Lori is not some sad emotionally stunted man, she’s a carefree and proud lesbian woman. Despite obvious contradictions, killing is not a means for her to regain control or status, it’s framed as a process of becoming more honest with herself. 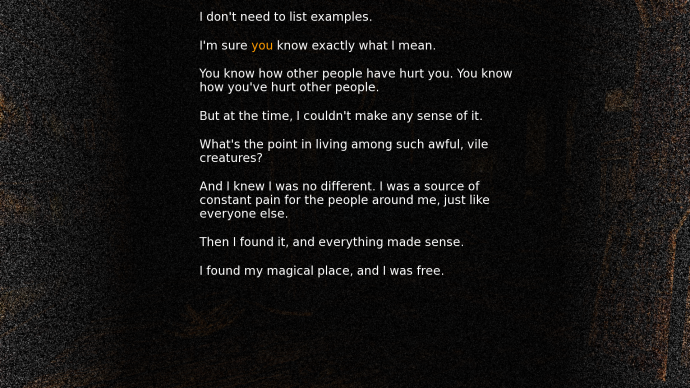 It was interesting to me, thinking about the complicated relationship I have with transgressive fiction. Am I drawn to them as just a voyeur, indulging my death drive? Does my enjoyment reveal something secret and horrible about myself? Lingering in the back, is there a “true” self of my own, one that could emerge at any time and despoil every illusion I’ve held about myself…

I feel sick and guilty reading these kinds of stories! I don’t know what it’s like to feel anything else. Not a prescriptive statement; I know what motivates my personal fascination. I want to feel bad, I want to make myself feel bad, it’s spiritual self-harm. In no jest, a masochistic impulse.

I read into Her Lullaby, to some degree, as about this fascination. Rare for the genre―either on the thought that doesn’t need to be said, or because it would ruin the dirty mirror―the text makes explicit that the killer’s motivations are bullshit. Which aspects of me are more true than others? At what point are you ever completely honest? It can’t keep escalating forever. Or as stated by the game: there is no authentic human.

Normally when I participate with transgressive fiction, I let in dark probing tendrils. My self-hate slithers up behind me. I use the stories as a vehicle to remind myself how awful things are, how awful I could be. Maybe I reflexively relate to negativity before positivity, so even the most extreme passes through. I’ve read traumatic things; I’ve dissociated, needed to lay down, felt a blank stare, and felt nothing. Which taunts me, why do I do this?

Her Lullaby isn’t a rumination of those themes, though I need to speak of them, it’s not that kind of wishy-washy sludge. To get the true end mistakes are made, and selfish stabby stabbings happen. These indulgent violent acts, in all of their shock and antipathy, give weight to the inverse when the player chooses not to act on simple and base impulses. There’s a throughline of rejecting awfulness, self-hate, negativity, going towards straight up loving and trusting another.

This leads up to stunning catharsis, as I’ve stated, a development very atypical for stories of kidnappings and serial killings. The killer dies because of her violent complexes and is forced to reflect on why she went so far. Sal and Tocco leave hand in hand, no doubt traumatized, but ready to live the rest of their life.

I usually let sudden clean endings pass through me. I’m weird, I don’t like catharsis that much. In Her Lullaby though, I felt something symbolic. My need to face down my death drive, to sometimes seep in it, was acknowledged in the text. Given consideration that it’s a deadly, difficult thing, even a thing that happens, but not something that defines a person. The death of its antagonist is a symbol. It might be a messy affair but even the deadliest negativity is something to be overcome.